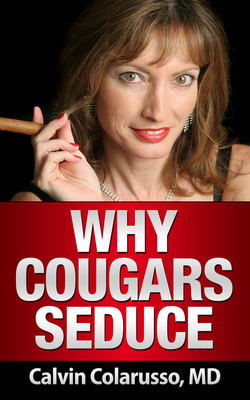 Why Cougars Seduce
by Calvin A. Colarusso, M.D.
Clinical Professor of Psychiatry,
University of California at San Diego
(7/15)


Cougar is a slang term that refers to a woman who seeks sexual relations with considerably younger men. This book deals with the dynamics and motivations of older women who seduce younger men as portrayed in 6 classical films.

Nearly everyone is familiar with the classic film The Graduate in which Anne Bancroft, as the famous Mrs. Robinson, seduces the recent college graduate Benjamin, played by Dustin Hoffman. The film has become part of our culture and has been immortalized by the Simon and Garfunkel song that plays throughout the film.

Because I am a child and adult psychiatrist and child and adult psychoanalyst, I’ll use psychodynamic concepts to explain these fascinating liaisons. Hopefully, an understanding of psychoanalytic developmental theory in the young adult and midlife development of women, and a discussion of psychoanalytic thinking on the similarities between puberty and the menopause, will provide a theoretical framework for a deeper understanding of the seductive women’s motivations.

Similar material on 3 of the 6 films was previously presented in my article published in 2014 in the American  Journal of Psychoanalysis entitled “Why Mrs. Robinson? The Seduction of Teenage Boys by Women in Classic Films.” I’ve included a bibliography at the end of the book to provide references for readers who wish to explore the subject further.

This book is divided into three sections. I’ll begin by briefly discussing some of the major developmental and dynamic themes and tasks that are at the core of female development in adulthood, particularly Middle Adulthood, ages 35-65. All of our “heroines” but two fall into that age group. Then each of the 6 films will be summarized with a discussion of each woman’s dynamics at the end of the section. In the concluding section,  I’ll discuss the similarities and differences among the six women and the effects of their sexual relationships on the teenage boys.  And I’ll conclude with a discussion of how the presentation of these relationships in film has changed from Tea and Sympathy in 1956 and The Reader in 2008.
Copyright 2011-2019, True Nature Productions, All Rights Reserved